The Inventions of Thomas Edison

Thomas Alva Edison was an American inventor and businessman. He developed many devices that greatly influenced life around the world, including the phonograph, the motion picture camera, and a long-lasting, practical electric light bulb

The first great invention developed by Edison in Menlo Park was the tin foil phonograph.

At around 5:30 in the evening on Dec. 10, 1914, a massive explosion erupted in West Orange, New Jersey. Ten buildings in legendary inventor Thomas Edison's plant, which made up more than half of the site, were engulfed in flames. Between six and eight fire departments rushed to the scene, but the chemical-fueled inferno was too powerful to put out quickly.

According to a 1961 Reader's Digest article by Edison's son Charles, Edison calmly walked over to him as he watched the fire destroy his dad's work. In a childlike voice, Edison told his 24-year-old son, "Go get your mother and all her friends. They'll never see a fire like this again." When Charles objected, Edison said, "It's all right. We've just got rid of a lot of rubbish."

Later, at the scene of the blaze, Edison was quoted in The New York Times as saying, "Although I am over 67 years old, I'll start all over again tomorrow." He told the reporter that he was exhausted from remaining at the scene until the chaos was under control, but he stuck to his word and immediately began rebuilding the next morning without firing any of his employees.

Was there any other viable response? In new book, "The Obstacle Is the Way: The Timeless Art of Turning Trials into Triumph," author Ryan Holiday says there wasn't. Sure, Edison could have wept, yelled in anger, or locked himself in his house in a state of depression. But instead, he put on a smile and told his son to enjoy the spectacle.

"To do great things, we need to be able to endure tragedy and setbacks," Holiday writes. "We've got to love what we do and all that it entails, good and bad. We have to learn to find joy in every single thing that happens."

After thoroughly surveying the damage, Edison determined that he'd lost $919,788 (about $23 million in today's dollars), according to Matthew Josephson's biography. The flames had consumed years of priceless records and prototypes, and his plant's insurance covered only about a third of the total damage.

But after just three weeks, with a sizable loan from his friend Henry Ford, Edison got part of the plant up and running again. His employees worked double shifts and set to work producing more than ever. Edison and his team went on to make almost $10 million in revenue the following year.

Edison's story is a powerful example of Stoicism, the ancient Greek philosophy that Holiday explores in his book. Holiday explains that the Stoics were not emotionless men devoid of feelings, but rather men who practiced total control over their emotions in a way that acknowledged forces beyond their control.

Holiday uses philosopher and writer Nassim Nicholas Taleb's definition to describe a Stoic: someone who "transforms fear into prudence, pain into transformation, mistakes into initiation, and desire into undertaking."

It's fine to initially respond to loss or failure with sadness or anger, says Holiday, but only if it's fleeting. When tragedy strikes, you must accept that it has happened and that you cannot change the past. Finding the opportunity to overcome a challenge ultimately makes you stronger.

Edison not only mastered his emotions but he also instilled this mindset in his employees. As A.H. Wilson, his vice president and general manager, told The Times after the flames died down: "There's only one thing to do, and that is to jump right in and rebuild." 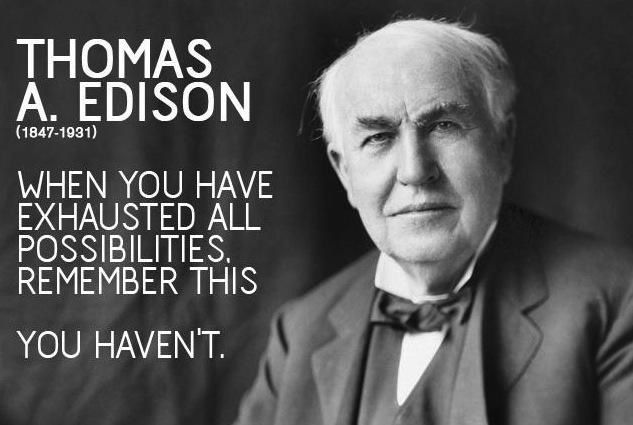 The Obstacle Is the Way: The Timeless Art of Turning Trials into Triumph