Silicon Valley enjoys something of a monopoly these days on making the most noise in the U.S. economy.

But there's been surprisingly little fanfare surrounding the latest project that seemingly all the most successful Valleyites have been pouring into: an artificial intelligence company called Vicarious.

For Aydin Senkut, whose Felicis Ventures was one of Vicarious' earliest investors, there is agreement among top valley VCs that now is the time to get into artificial intelligence and machine learning, because it is going to change everyone's lives irrevocably.

"AI and machine learning is a really big deal," he told us by phone recently. "For the longest time no one took it very seriously, but... more and more companies are now seeing how far they've fallen behind in this area, and how it's critically important to have this capability."

What exactly is this capability? Despite its marquee backers, Vicarious has gained a reputation for secrecy. Co-founder Scott Phoenix, a computer scientist and designer, told us his team was not currently doing interviews. The other co-founder, a neuroscientist named Dileep George, did not respond to several requests for comment.

But in previous interviews, George has discussed some of the potential practical applications for artificial intelligence. In an interview with NBC's PressHere in 2012, he described how an "improved Siri" could someday be smart enough to complex commands from any speaker, even with ones with thick accents, for things like booking air tickets without having to click through a bunch of screens. In the nearer term, which is still measured in years, AI capabilities will be sufficiently advanced that they can perform medical diagnoses, or recognize images that don't contain any preexisting text tags.

George and Phoenix call the underlying technology that powers these applications recursive cortical networking. RCN means teaching computers to model brain functions — specifically, those of the neocortex, the part responsible for sensory processing. As George, who left an AI venture created by Palm founder Jeff Hawkins to found Vicarious, told KurzweilAI in 2012, "My goals have always been to embody the computational principles of the brain in a mathematical model, but RCN is a ground-up rethinking of what kind of algorithmic approach is necessary to solve the problem.”

Vicarious' breakthroughs are still in their infancy, but they've posted a demonstration of something it can already do: break a CAPTCHA security device. We've GIF'ed how it works here:

The Valley seems to be hungry for AI in general. But if there's any kind of AI arms-race on, the field remains pretty narrow, if only because there are so few people qualified to lead the way. Facebook recently hired its own specialist in charge of AI, NYU's Yann LeCun, but he and his team remain focused on how to improve Facebook's own functions. A more direct rival, of sorts, to Vicarious, is a firm called DeepMind. Google bought DeepMind for $400 million earlier this year.

Ironically Vicarious and DeepMind both share Thiel's Founders Fund as a backer, which confirms how narrow the space remains, but also how VCs are attempting to get a piece of as much AI action as they can. Recode reported in January that London-based DeepMind is working on similar projects as Vicarious, like advanced image recognition, though they too are quite cagey about what exactly they're up to.

"The reality is, there are a very limited number of AI and machine learning experts in the world, which is one reason why it's been getting so much attention," Senkut says. "It is such an important field, and [DeepMind] is one of few that are thinking very big and ambitious."

In fact, the most publicly accessible AI projects are coming from the government. Sometime between 2006 and 2007, the Director of National Intelligence began earmarking funds for IARPA, short for Intelligence Advanced Research Projects Activity. Its goal was to start developing technology for the country's 16 different spy agencies. IARPA is itself looking to accelerate its image-reading capabilities through a program called JANUS. It's also hoping to develop a technology that can "[understand] human interactions that involve trust and trustworthiness."

Bruno Olshausen, a Vicarious adviser and neuroscience professor at Berkeley told us that the most exciting research IARPA is conducting is in a field called Connectomics. The goal is nothing less than recreating the human brain. The output from the field will make the aforementioned projects look prehistoric.

"Evolution discovered all these secrets — like building an eye — about how to build good, simple processing," he told us. "This is something computers cannot do now. But when you look at a brain under a microscope, you're basically looking at the solution, you're looking at a microchip."

Last month, Elon Musk, who came on board as a backer in a $40 million funding round that also included Zuckerberg and Kutcher, said one of the reasons he'd invested in Vicarious was to keep an eye on unexpected negative developments in AI — basically, a "SkyNet" scenario.

Olshausen says that scenario remains a remote possibility. Our knowledge of how the brain works is more or less where our knowledge of physics was before Newton: nearly useless.

"Absent a major paradigm shift - something unforeseeable at present - I would not say we are at the point where we should truly be worried about AI going out of control," he said in a follow-up email. " That is not to say that we shouldn’t worry about how *humans* will use machines or engage in warfare via machines - e.g., for domestic spying, foreign espionage, hacking attacks and the like. But in the meantime we can rest easy knowing that computers themselves are not going to take over the world anytime soon, or in the foreseeable future."

The AI crew is playing a very long game — there have been reports that Vicarious makes anyone who comes on sign something that says they will not ask about short-term progress or profits. But Senkut believes that as novel as it sounds now, we will someday be taking AI for granted.

"It's unstoppable," he said. "This thing is going to be here before we know it, like with HTTP distribution coming out in the '70s, I don't think people realized it was going to give birth to the Internet. It's not like, Oh my god, what's the next thing in a few months. I'm just really excited that it's going to be an enabling platform, that’s something I don't even have to speculate about." The AI crew is playing a very long game — there have been reports that Vicarious makes anyone who comes on sign something that says they will not ask about short-term progress or profits.

AI and machine learning is a really big deal

It's unstoppable. This thing is going to be here before we know it, like with HTTP distribution coming out in the '70s, I don't think people realized it was going to give birth to the Internet. It's not like, Oh my god, what's the next thing in a few months. I'm just really excited that it's going to be an enabling platform, that’s something I don't even have to speculate about 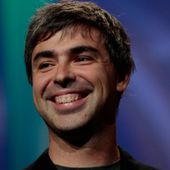 He wants to see people like Musk change the world Tesla Motors CEO Elon Musk stands to gain some inheritence once Google CEO and co-founder Larry Page passes away. At a TED conference Wednesday ...