The hardest part about buying furniture from Ikea is not constructing it. It’s making sure it’s going to look good in your home. The truth is, most of us are not equipped with the trained eye of an interior designer, which can lead to some regrettable purchases. That’s where Ikea’s new catalog app comes in handy. Using augmented reality, the app allows customers to visualize 3-D versions of Ikea’s furniture in their homes. So the sofas, tables, desks and chairs that you’d otherwise have to eyeball (or if you’re the planning type, pre-measure), can now be virtually placed into a room, ultimately making the planning process much more accurate and the chance of you schlepping a 50-pound box back to Ikea much less likely.


The way it works is this: Customers flip through the print catalog, and when they come across a plus symbol on a page, they hover their phone or tablet over it until a screen pops up asking them to scan the images on the page.

At that point users will see the bonus features, which could be a 360-degree view of a room, videos, additional product information, or the option to place a piece of furniture in their room.


THEY PLACE THE PHYSICAL CATALOG IN THE SPOT WHERE THEY ENVISION THEIR NEW LOVE SEAT.

There are only around 100 products available for the 3-D augmented reality option, which in the grand scheme of a 300-plus page catalog doesn’t amount to much. But the furniture that was chosen—generally larger centerpieces like sofas and chairs—make a lot of sense as the primary options. When customers find the piece they’d like to test out, they place the physical catalog in the spot where they envision their new love seat, and the device’s camera uses the book as both an anchor and a way to gauge the correct scale for the products shown on screen.


Since 2011, Ikea has tied their annual catalog to a mobile app with the hopes that it will make the shopping process easier and more fun, which one can assume will ultimately lead to more purchases and revenue for the store. Every year, the product team assesses how the app was previously used and how it could be improved for the next catalog launch. “We’re looking at how it’s been used and what are the improvements that can be done,” says Mattias Jöngard, Ikea’s Global Communication Integration Manager. “The technology or the functions themselves are not are not really the driving force. Rather, it’s how can it add value to our consumers?” Ikea did a little digging into their customers’ habits and found that around 14 percent of people have bought a wrong-sized piece of furniture and more than 70 percent of people don’t know how big their homes really are.

This year’s version was a bigger tech push, requiring the company to fine-tune their 3-D imaging.

“It’s not the easiest thing to make material look and feel as in real life,” says Pontus Sjöberg, product manager for the app. “We needed to decide how much quality and detail do we want? And how much weight should the models have?”


MORE THAN 70 PERCENT OF PEOPLE DON’T KNOW HOW BIG THEIR HOMES REALLY ARE.

Ikea worked with their 3-D specialists to nail the texture of organic textiles, and for the most part, the images are passably realistic. At least to the point where you could imagine if that green sofa you’ve been eyeing looks as good in your living room as it does on page. “One of the challenges was to find the right combination between speed and quality,” Jöngard says, adding that the right balance was imperative for making sure the app didn’t feel clunky.


When I used the app to place a sofa near the window in the WIRED New York office, it took me a while to figure out how to position my iPad so that the piece of furniture didn’t appear as though it was sitting on top of my coworker. The augmented reality function is cool, and it really is handy, but at least for me it took a little finessing to figure out the right placement and scale.


The app’s other features, particularly the time-lapse images that allow you to watch a room being decorated piece-by-piece, are gorgeous and a great way to get some inspiration for your own home. Which, Sjöberg says, is the whole point. “I think this application should always try to enrich the catalog and enrich the experience for consumers—and that is an ongoing journey.”

About our 3D App: It’s not the easiest thing to make material look and feel as in real life. We needed to decide how much quality and detail do we want? And how much weight should the models have? 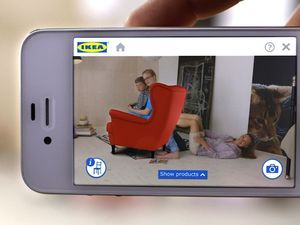 “It’s not the easiest thing to make material look and feel as in real life,” says Pontus Sjöberg, product manager for the app 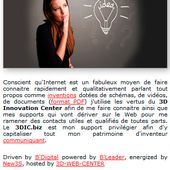 New Solutions : BELAZ 75710 - The biggest dump truck in the World designed with 3D CAD/CAM systems Thanks to Belaz for providing me with this fantastic footage of their 75710 dumptruck which now is The World's Largest Mega-Ship Launches for the First Time - Be 3D - Dare to be better ? OK ! - OOKAWA Corp.

3D benefits and much more : The World's Largest Mega-Ship Launches for the First Time Take the Empire State Building, lay it on the ground and add another 150 feet. Then put it out to sea. That's ...

The World's Largest Mega-Ship Launches for the First Time - Be 3D - Dare to be better ? OK ! - OOKAWA Corp.