After a marathon two-and-a-half hour Google I/O keynote, the tech giant had one final surprise for attendees: a piece of cardboard.

Developers at I/O walked away with a strange construction kit for a project named, imaginatively, Cardboard.

SEE ALSO: Google I/O 2014: Everything You Need to Know

Cardboard is a way to create an Oculus Rift-like virtual reality viewer with your Android smartphone. Users can put together their Cardboard kits – which contains corrugated cardboard, some lenses, magnets, two strips of velcro and a rubber band.

Put it together – along with your Android smartphone – and this is what you get.

If you didn't get one of these kits in person, you can build your own using these design files.

VR on the cheap

Two Google employees at the Google Cultural Institute in Paris built Cardboard as part of a 20% project. Their bosses loved the smartphone housing so much, it inspired a larger group to build an experimental SDK. Because the VR Toolkit is experimental, it won't get the same level of quality and support that Google offers to other Android SDKs and libraries – and Google has warned that the toolkit's contents may change or break without warning. Still, this is a fun way for developers to look at experimenting with VR.

It's worth noting that early Oculus Rift prototypes were designed around an iPhone with a VR viewer – so the concept isn't that bizarre.

OK, we lied. It's totally bizarre. It's also kind of awesome.

Here are some Google I/O attendees trying out their Cardboard: 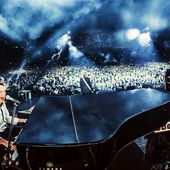 A seat beside McCartney's piano at that same concert could cost you as little as $10 : Google's cardboard 3D headset - OOKAWA Corp.

It would have cost you more than $500 for a front-row seat at Paul McCartney's farewell to Candlestick Park Concert in San Francisco last August - and you wouldn't have been able to see much. But as

A seat beside McCartney's piano at that same concert could cost you as little as $10 : Google's cardboard 3D headset - OOKAWA Corp.