This Is the Apple Patent That Takes Aim at GoPro

GoPro's stock took a beating today after Apple was granted a patent for taking pictures with a remote control. Take a peek at the sketch included with the filing to the U.S. Patent and Trademark Office.

It looks a bit like the Apple Watch. Toward the end of that product's introduction in September, Apple CEO Tim Cook teased this feature, saying a member of the development team "loves to use theirs as a view finder for their iPhone camera." Skateboarders could take action shots of themselves by pressing a button on their watch to activate the iPhone positioned on a staircase. Could it be the end of self-timers and selfie sticks?

GoPro investors, who sent the stock tumbling as much as 15 percent today, must be a little freaked out by the prospect of people recording their dangerous stunts using an Apple Watch-iPhone combo instead of strapping a Hero camera to their heads.

Or they may not like that Apple's patent could prevent GoPro from building the same sort of feature for its cameras on, say 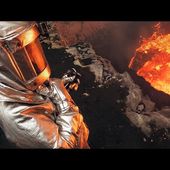