Robbie Maddison is the first person to use a dirt bike to surf a wave — and he did it in Tahiti’s monster surf.

The modern-day Evel Knievel, Maddison has turned everything from the ski jump in the Salt Lake Olympic Village to the Arc de Triomphe at the Paris Las Vegas Hotel and Casino into props for his record-setting motocross stunts, but he says his latest feat was his most daring yet.

The stunt, titled “Robbie Maddison’s Pipe Dream,” is the result of a two-year partnership between Maddison and DC Shoes that allowed the motocross superstar’s imagination to run wild.

“I don’t want to take away from any of my other stunts, as they all gave me a different thrill factor, but Pipe Dream is by far the most ambitious project I have pulled off,” Maddison told GrindTV. “The thrill was more scary than rewarding.

There are moments when you know you’re in the wrong place at the wrong time, and that’s the closest I had ever been to that.”

Maddison came up with the idea by wanting to combine all of his favorite things: dirt biking, surfing and standup jet skiing.

Over the course of two years, Maddison underwent the painstaking endeavor of not only outfitting a motorbike to float (a special inflatable air bag had to be installed on his bike to float it if he wiped out), but also learning how to ride and balance it on water.

“Riding the wave was the most challenging terrain I’ve ever taken a motorcycle on,” said Maddison. “Every time there was a mechanical change in the bike, it changed the way it rode.”

Along with a massive DC production crew and assembled members of the media, Robbie arrived in Tahiti on April 17 to attempt the stunt over the course of 17 days.

“The first take at Teahupoo (arguably the most dangerous wave in the world) was a flop, as the team mistimed the wave and Maddison sunk in the whitewater,” TRANSWORLD MOTO editor-in-chief Donn Maeda, who traveled with the crew, told GrindTV. “Three successful takes followed, but a giant swell was coming in and Maddison wanted to go huge, as usual. He convinced only a few crew members to stay longer for the swell.”

A few members of the crew stayed with Maddison in Tahiti, including Maeda, and in order to keep the project secret — besides having everyone in the crew sign non-disclosure agreements before getting on the plane to Tahiti — the team switched locations to the less-crowded waves of Papara for the incoming swell.

“The result of the first take at Papara was nearly disastrous,” said Maeda. “Maddison was consumed by the wave and actually went missing for several minutes.”

“Honestly I was hoping we wouldn’t have to go out in the water that last day,” said Maddison. “That morning I was doing everything I could to take my mind off the ocean, because Papara was totally firing that final morning. It just kept seeing these 25-foot waves; and waves that size are terrifying. Everything [in me] was saying don’t do it. There was lightning and thunder coming in, but I’m a man of my word, so I knew I couldn’t back out.”

What happened next is equal parts mesmerizing and terrifying to watch. Maddison rocketed down the face of an absolutely giant wave. The wave crashed around him, and he was surrounded by whitewash. Maddison briefly popped through the whitewash in what looked to be a final moment of triumph, before the wave gained momentum and overtook him. 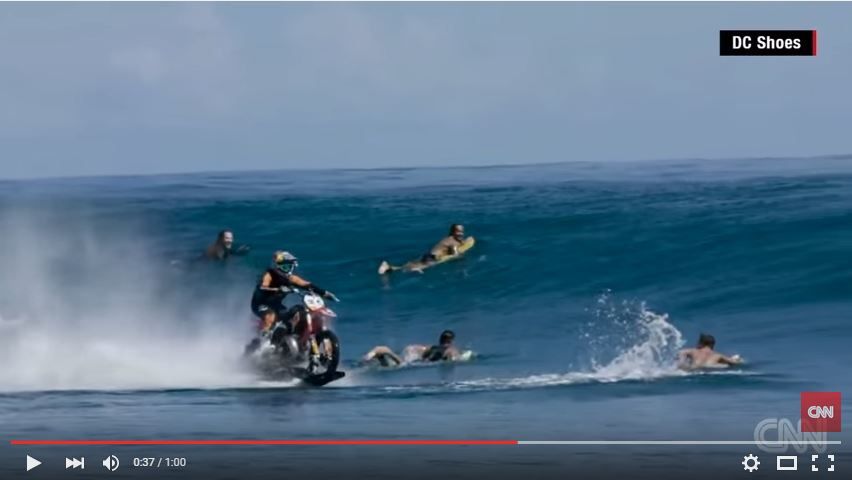 “The wave just picked me up off my bike and slammed me down into the water,” said Maddison. “I felt like a piston rattling around in a car engine. I honestly thought those were the last moments of my life. That’s something I don’t ever want to experience again.”

Maddison survived his initial fall. Unfortunately, he promptly caught four more waves directly on top of his head, which pulled him further out into the surf. But, after several minutes, the crew was able to recover the waterlogged stuntman.

“Growing up surfing gave me the insight and knowledge on how to read waves, as well as the ability to be comfortable in the ocean,” said Maddison, who contributed his final success to his upbringing in Kiama, Australia. “But I’m just happy to survive that. The whole crew thought I was a goner. I’m just glad I’m still here.”

That sentiment was shared by Maeda.

“I’ve been good friends with Robbie for many years, and his courage and creativity never ceases to amaze me,” said Maeda. “This was, by far, the craziest thing I’ve seen him do.”

As far as what he’ll do next, Maddison is a bit less than willing to disclose specifics.

“I’m going to try to do a few more things surfing on the water bike, but then I’m going to go in a completely different direction — something I think will surprise a lot of people,” Maddison said, laughing. “I can’t tell you what it is, because I want to keep it secret. But, don’t worry, you’ll hear about it eventually.” While the waves of Tahiti often play home to amazing surf sites, Maddison’s stunt was a first. Photo: DC Shoes 'I honestly thought those were the last moments of my life. That’s something I don’t ever want to experience again' Read more at http://www.grindtv.com/topic/robbie-maddison/#IDI3l5YKMgxKI4VA.99 For a moment, it seemed as though Maddison might outrun the whitewash. Unfortunately for him, that wasn’t the case. Photo: DC Shoes

DC presents Robbie “Maddo” Maddison’s “Pipe Dream,” giving the world a chance to witness history being made as Maddo rides his dirt bike on the powerful and iconic waves of Tahiti. From his helmet to motocross boots, Maddo was dressed for FMX when he took his dirt bike into the unchartered saltwater terrain of the Pacific Ocean in French Polynesia. For nearly two years Robbie has been focused on making surfing on his motorbike a reality. His efforts paid off in Tahiti, where he rode the world famous waves at Teahupoo and Papara. Despite having jumped off Olympic ski jumps and off of Las Vegas hotels, Maddison said his experience in Tahiti was the closest he’s come to dying. Photo: DC Shoes Le VRAI pouvoir de l'image : One photo a day in the worst year of my life - OOKAWA Corp.

Le VRAI pouvoir de l'image : One photo a day in the worst year of my life - OOKAWA Corp.