Today’s 4G connections won’t be able to handle VR, so we need more advanced networks to deliver the high-quality connectivity that these immersive experiences will demand

Virtual reality pioneer Palmer Luckey has hit out at Apple, claiming that its Mac computers are not good enough to support his VR headset, Oculus Rift .

Luckey is the founder of Oculus VR, the virtual reality company that Facebook bought for $2 billion in 2014.

In an interview with ShackNews at an Xbox press event this week, Luckey said that the Oculus Rift will only work with Macs when Apple decides to "release a good computer".

"It just boils down to the fact that Apple doesn't prioritise high-end GPUs (graphics processing units)," he said.

"You can buy a $6,000 Mac Pro with the top-of-the-line AMD FirePro D700 (graphics card), and it still doesn't match our recommended specs."

"So if they prioritise higher-end GPUs like they used to for a while back in the day, we'd love to support Mac. But right now, there's just not a single machine out there that supports it."

Oculus VR is due to begin shipping its Oculus Rift headset on 28 March, with a price tag of $599.99 - which is roughly £410, although official UK pricing hasn't been revealed yet.

With the various duties included, UK pre-orders will end up costing around £500. You can buy a $6,000 Mac Pro with the top-of-the-line AMD FirePro D700 (graphics card), and it still doesn't match our recommended specs.

Rival virtual reality headsets - including the HTC Vive , Sony Playstation VR and Microsoft Hololens - are also due to launch imminently.

However, experts have warned that many of these high-tech headsets won't work with most people's PCs .

According to Jason Paul from graphics card company Nvidia, the graphics processors needed to run a virtual reality game are about seven times more powerful than those required to run a standard PC game.

That means there will only be about 13 million PCs in the world that are powerful enough to run a virtual reality game when the first headsets go on sale. Meanwhile, network experts are warning that virtual reality gaming could pose a major challenge for internet service providers, because of the sheer volume of data that needs to travel over the network.

Alexandre Pelletier, head of innovation at Tata Communications, said that today’s 4G connections won’t be able to handle VR, so we need more advanced networks to deliver the high-quality connectivity that these immersive experiences will demand.

"One of the most exciting areas that VR presents for content creators is shared experiences such as the Eve: Valkyrie game due to ship with Oculus Rift, or the live VR concerts planned by Red Bull TV," he said.

"However, anyone looking to mix live experience and VR will need superfast, robust connectivity, as a stop-start connection could dampen the user experience, or potentially destroy it – going as far as making the user disorientated and nauseous." 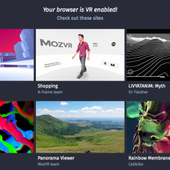