Technological advance produced thousands of doses a day; could be used on battlefields, during epidemics

THURSDAY, March 31, 2016 (HealthDay News) -- Scientists have created a compact machine that can churn out thousands of doses of prescription medication in a day -- putting the capabilities of a drug-manufacturing plant into a device the size of a kitchen refrigerator.

Experts said the advance could eventually allow on-the-spot drug production in special circumstances -- on the battlefield, during epidemics, after natural disasters, or in cases where a drug is needed for a rare medical condition, for instance.

The research, detailed in the April 1 issue of Science, took a new approach to producing prescription drugs -- which, right now, is often an inefficient, time-consuming process.

Chemical engineers at the Massachusetts Institute of Technology (MIT) used so-called "flow technology" to develop a compact machine that can automatically turn raw materials into a finished pharmaceutical-grade medication.

For now, the system is limited to making liquid versions of four common prescription drugs: the antidepressant fluoxetine (Prozac); diphenhydramine hydrochloride, an antihistamine that includes brand-names like Benadryl; the sedative diazepam (Valium); and lidocaine, a widely used local anesthetic.

But the researchers say that drug list can be expanded.

"We're also working on producing tablets, which are more complicated to manufacture than liquid drug formulations," said Klavs Jensen, a professor of chemical engineering at MIT who worked on the study.

Other technologies -- such as 3D "bioprinters" -- could help make that happen, according to Jensen.

Many drug companies are already looking into alternative processing methods -- ones that are "continuous" and can be done at one location, Jensen said.

The traditional way of drug-making is similar to cooking, according to Rainer Martin, a senior scientist with drug company Hoffmann-La Roche, in Basel, Switzerland.

Martin, who wrote an editorial published with the study, explained the process this way: Drugs are made in "batches," and the ingredients -- broad groups of chemicals known as reagents, catalysts and solvents -- are gradually added into a vat, stirred and heated. Then, the brew is analyzed to see if the chemical reactions are complete.

The problem, Jensen said, is that batch manufacturing has "little flexibility to respond to surges in demand" -- such as epidemics. Plus, he added, there can be "severe disruptions" in the drug supply if one plant has to shut down.

The compact system his team developed is continuous, Jensen explained. Chemical reactions take place as chemicals flow through small tubes, instead of sitting in large vats.

The result, according to Martin, is that complex and "laborious" drug-making steps are all done in "fully automated fashion."

Martin said he could envision the compact system being used in a number of scenarios: During a disease outbreak in a refugee camp or remote area, for example, or by individual hospitals that need large amounts of a particular drug on a regular basis.

Matthew Osterhaus, immediate past president of the American Pharmacists Association, agreed that the technology might prove useful in special circumstances.

As an example, he pointed to "orphan drugs" -- medications used to treat rare diseases. "Let's say there's a condition that's treated at five medical centers in the U.S.," Osterhaus said. "It's possible those hospitals would be able to use this."

When it comes to everyday health care, though, it's difficult to see how an appliance-sized drug machine could fit in, according to Osterhaus. As a pharmacist, he said, he has access to about 6,000 drugs right now.

"So it's a stretch to see how this could change my practice," Osterhaus said.

Jensen agreed that the technology could be used in specialized cases, like humanitarian crises and orphan-drug production -- since "small-volume" batch processing is usually not cost-effective for large plants.

And then there's the potential for battlefield use. Jensen said "national defense needs" are what spurred the quest for such a compact system: The research was funded by the Defense Advanced Research Project Agency, which is aiming to fortify medical care available on the front lines.

But Jensen said he also envisions larger health systems, like a hospital network or a health plan, being able to manufacture their own drugs.

Martin went deeper into visionary territory -- seeing a future where people can use smartphone apps and a microwave-sized device to cook up an antibiotic for their feverish toddler (in consultation with a doctor).

But that, he stressed, won't be happening any time soon.

For now, there are more pressing issues, according to Martin. One is how the raw materials for making the drugs would be delivered: "Would it be, for example, in the way of cartridges, similar to ink for inkjet printers?" he said.

And at the other end of the process, Martin said, there would have to be ways to safely dispose of waste products.

The U.S. Food and Drug Administration has more on how drugs are developed. 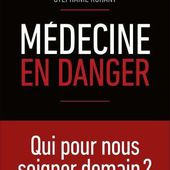 The Quantified Self [3] is a movement to incorporate technology into data acquisition on aspects of a person's daily life in terms of inputs (e.g. food consumed, quality of surrounding air), states