Digital native, the term chosen for this report, is perhaps the most widely used phrase in circulation. Marc Prensky coined digital native in 2001, and later elaborated on the concept in 2009 and elsewhere.

Digital natives, according to Prensky, are the generation of young people who are all "native speakers" of the digital language of computers, video games and the Internet.

In other words, they are the first generation to have grown up with new technology, having lived their entire lives surrounded by and using tools and toys of the digital age. E-mail, cellphones and instant messages are not only a part of their lives but are integral parts of their lives.

According to Prensky, who focuses mostly on youth in the United States, unlike older generations young people are now constantly surrounded by and immersed in, and permanently plugged into, portable personal devices such as mobile telephones, MP3 players and handheld games consoles.

There are a myriad of other terms associated with digital natives:

Others have written about young people who are new millennium learners (Pedró, 2007) and are described as living digital childhoods (Vandewater et al., 2007) within media families (Rideout and Hammel, 2006).

A digital native is defined as a youth, aged 15-24 inclusive, with five years or more experience using the Internet.

There are more than a few names in circulation that try to capture the broad concept of youth and digital networking technologies. Three of the most common terms in use are "net generation", "digital natives" and "millennials".

One groundbreaking collection of seminal ethnographic studies, for instance, has outlined "how digital media are changing the way young people learn, play, socialize, and participate in civic life". In a summary of their five-year research programme, they argue that: "Most youth use online networks to extend the friendships that they navigate.... The majority of youth use new media to ‘hang out’".

Both national and international policy-makers are also paying increasing attention to digital natives, not only because of the possibilities that ICTs open up for young people all around the world, but also on account of the role that young people play in shaping and driving the information society.

Young people are increasingly earning recognition from governments and the international community as powerful agents of change whose inclusion in politics is vital to improving democratic processes. Recent social movements like the Arab Spring, Spain’s 15-M, Mexico’s YoSoy132 movement and student protests in countries around the world from Chile to the United Kingdom reaffirm the need to address this generation’s call.

Technology – and specifically ICT – has played a central role in young people’s rise to prominence on a global scale. It has helped them to mobilize behind a common cause and to collaborate, and it has given them a voice where before they had none. ICT has brought them together in response to social concerns. It has connected them across huge geopolitical barriers. For young people, access to information means better access to the capital, markets and training they need in order to pursue a career or studies; increased participation in political processes; and recognition of young people as responsible citizens in today’s society. Youth entrepreneurship – which is facilitated by access to technology, the Internet and information – is fast being positioned as a solution for youth employment. Young people are rising to the challenge by pioneering the use of ICT and by driving trends in what is a major and dynamic growth industry. Reasons for their great ability to adapt to and use ICTs include their capacity to learn to use ICTs quickly, their natural enthusiasm for new technology (which offers a wide variety of solutions for playing, communicating and socializing), their generally higher literacy rates and the extra spare time they tend to have compared to older people (ITU, 2008).

In any event, young people are the tip of the digital spear across much of the globe, so we must be ready to listen, learn and grow with them. 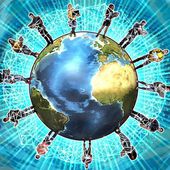 DAOs are the foundation of Web3, the creator economy and the future of work - OOKAWA Corp. Raisonnements Explications Corrélations

DAOs are a defining construct for everything that comprises the new decentralized internet, or Web3, and the emerging crypto economic system. Decentralized autonomous organizations (DAOs) started ...

DAOs are the foundation of Web3, the creator economy and the future of work - OOKAWA Corp. Raisonnements Explications Corrélations