“We use our hands to communicate with others, to learn about the world, and to take action within it

Seven years in the works, this tech has come a long way but is far from finished.

In the novel-turned-movie Ready Player One by Ernest Cline, the protagonist escapes to an online realm aptly called OASIS. Instrumental to the OASIS experience is his haptic (relating to sense of touch) bodysuit, which enables him to move through and interact with the virtual world with his body. He can even activate tactile sensations to feel every gut punch, or a kiss from a badass online girl.

While no such technology is commercially available yet, the platform Meta, formerly known as Facebook, is in the early stages of creating haptic gloves to bring the virtual world to our fingertips. These gloves have been in the works for the past seven years, the company recently said, and there’s still a few more to go.

These gloves would allow the wearer to not only interact with and control the virtual world, but experience it in a way similar to how one experiences the physical world.

The wearer would use the gloves in tandem with a headset for AR or VR. A video posted by Meta in a blog shows two users having a remote thumb-wrestling match. In their VR headsets, they see a pair of disembodied hands reflecting the motions that their own hands are making. In their gloves, they feel every squeeze and twitch of their partner’s hand—at least that’s the idea.

[Related: One of Facebook’s first moves as Meta: Teaching robots to touch and feel]

“We use our hands to communicate with others, to learn about the world, and to take action within it,” Sean Keller, Meta Reality Lab’s research director, said in a company blog. “We can take advantage of a lifetime of motor learning if we can bring full hand presence into AR and VR.”

Right now Meta’s haptic reach exceeds its grasp, but they’re working to close the gap. Meta’s vision is to create customizable, comfortable, lightweight gloves that convey all the tactile information we’re used to, such as pressure, texture, and weight. The glove would track hand motion with precision and accuracy, and would also be able to relay virtual information back to the wearer, such as when the glove encounters a virtual surface or object.

Existing soft robotics and microfluidics technology, such as those used in limb prosthetics, helped the developers lay a foundation for the glove. The prototype, which right now looks like some heavy duty winter sport or metallurgy gear with a few wires, is covered with hundreds of tiny motors called actuators. The actuators are responsible for the ever-changing sensations relayed from the virtual world to the real world on the wearer’s hand. The development team applied pneumatic and electroactive actuators, which respectively use air pressure to create force, and change in size and shape in response to an electrical field. Many more of these pneumatic actuators can fit onto a glove than a traditional mechanical actuator.

Running the show will be a high-speed microfluidic processor. This tiny computer chip will dictate air flow that moves the actuators, signaling to the glove’s valves when to open and close, and how much. In a refined vision of the gloves, the user’s movements will be perfectly synced with what they feel. If they push their hand into a virtual surface, the processor will activate the actuators to communicate the solid rigidity of that surface. We’re still a ways off from haptic gloves, let alone a whole bodysuit, but Meta seems confident that this prototype is a promising start.

As part of their ultimate goal towards grounding a virtual world, also in the works at Meta are AR-capable glasses and a wearable wrist device. The glasses would let the wearer navigate the physical world while tending to remote and virtual needs, like placing an order for coffee or examining spreadsheets. The wearable device doesn’t function as a way of feeling the virtual world, but a way of navigating and controlling it. Think of it as a next-generation mouse that allows you to make choices with a simple wrist flick.

However, Meta’s plan has already run into some hurdles. The nascent technology faced controversy when haptics company HaptX tweeted out a statement on Tuesday claiming that the principle components of Meta’s prototype “appear to be substantively identical” to their patented technology. The company’s founder and CEO says he seeks “a fair and equitable arrangement” that resolves this problem while Meta continues to use HaptX’s technology. 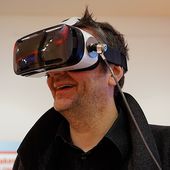 Today's 4G connections won't be able to handle VR, so we need more advanced networks to deliver the high-quality connectivity that these immersive experiences will demand Oculus Rift creator says ...