As additive manufacturing (otherwise known as 3D printing) becomes ever more advanced, more and more industries are beginning to embrace it — and the footwear industry is no exception.

The patent, filed back in September 2012, is specifically for “automated strobel printing.”

The strobel is one way a shoe can be “lasted” — affixing the shoe’s upper to its midsole.

There are typically three types of lastings: slip, strobel, and combination.

Nike’s patent calls for a machine to scan the design into a computer, and based on the data, print sewing guidelines on the strobel. Nike’s increasingly popular Flynit athletic shoe line primarily uses strobel.

The 3D printing technology patented by Nike wouldn’t fundamentally change how the company makes shoes. Rather, it would merely update and modernize the process in which it does so. In the patent application, Nike explains that due to improvements in technology, “the number of shoe pieces being added has increased, requiring increasingly complicated manufacturing steps to produce shoes.”

3D printing would reduce human labor for Nike, but the company is nowhere near a world where it could completely eliminate it. The shoe’s upper still needs to be attached to the midsole strobel, a process Nike admits is “beyond the scope” of their patent. If you can scribble, trace or wave a finger in the air you can use the 3Doodler 2.0. The possibilities are limited only by your imagination. Draw Your Own 3-D Masterpiece With The "3Doodler" The art LAS VEGAS - Your iPhone is really great at finding places to eat, recipes to cook and stores to buy food at, but when it comes to actually analyzing the things that go in your mouth, it's not very ... 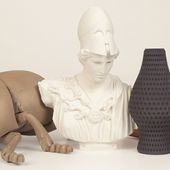