The FAA's long-awaited rules for flying small drones have arrived. Up until today it was illegal to fly drones for commercial purposes unless you had a specific exemption from the FAA for testing. The new rules, if adopted, would allow any company to fly so long as they abide by some sensible guidelines.

For the most part the agency chose to avoid adding any new restrictions, preferring to incorporate drones into the existing framework in an attempt to minimize complexity and costs. Most importantly, the agency said it believes that drones can save lives, boost the economy, and be integrated safely into the national airspace.

PILOTS WILL NEED TO TAKE A TEST AND OBTAIN A CERTIFICATE

This is a big departure from what many drone experts had predicted. Following a report in The Wall Street Journal, we had written that the FAA regulations around drones might be "brutally restrictive." There are plenty of rules in this new document, but nothing that would undercut the burgeoning industry.

Probably the biggest change is that commercial pilots will now be considered operators. They would have to pass a test at an FAA facility, obtain a certificate rated for flying small unmanned aircraft, and renew that test every two years. They will not, however, have to log many hours of practice before hand, as would be required by a commercial pilot's license for airplanes.

The FAA proposal also added an age limit of 17. No person can fly more than one drone at a time, and operators must provide their drone to the FAA for inspection upon request.

Commercial drones would have to stay under 500 feet, fly only during the day, and operate within a pilot's line of sight. Amazon's delivery drone, in other words, is still just a fantasy. But drones could become commonplace on farms, construction sites, and during search and rescue operations. The rules would apply to all units classified as "small" unmanned aircraft, which the FAA defines as 55 pounds.

"The FAA’s proposed rules for small UAS could take one or two years to be adopted and, based on the proposal, even then those rules wouldn’t allow Prime Air to operate in the United States," said Paul Misener, vice president of Global Public Policy at Amazon. "The FAA needs to begin and expeditiously complete the formal process to address the needs of our business, and ultimately our customers. We are committed to realizing our vision for Prime Air and are prepared to deploy where we have the regulatory support we need."

The rule requiring drones to operate only within line of sight also received some pushback from US startups based on what's happening abroad. "The rule is still restrictive in the sense that it prevents [beyond line of sight] operations," said Jesse Kallman, head of regulatory affairs at Airware. "This is not unexpected. They state the technology is not available, but indeed it is, and is being used safely in Europe today.

The FAA wants to keep its current rules in place for model aircraft. It's likely that most small consumer drones would fall into that category and not require extensive testing or certification to operate. Fear not citizens, you can still get a drone for Christmas and crash it immediately.

Even if the proposal was made public today, the agency still has to accept public comment before formally implementing them, something that Bloomberg reports could take as long as two years. On today's call, the FAA also basically admitted that it doesn't have the capability to monitor how a rancher in Nebraska is flying. If she operates her drone beyond the line of sight or after it gets dark, no one will be around to stop her. If that behavior was observed and recorded, however, the FAA would now have standing to pursue legal action.

The FAA’s proposed rules for small UAS could take one or two years to be adopted and, based on the proposal, even then those rules wouldn’t allow Prime Air to operate in the United States.

The FAA needs to begin and expeditiously complete the formal process to address the needs of our business, and ultimately our customers. We are committed to realizing our vision for Prime Air and are prepared to deploy where we have the regulatory support we need. Is the hoverbike about to become reality? Hoverbike is a revolution in aviation, designed to do what a helicopter does, but cost less and do so better. Coffee Copter: un drone qui vole en rond avec 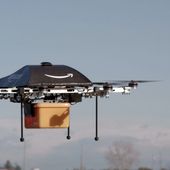